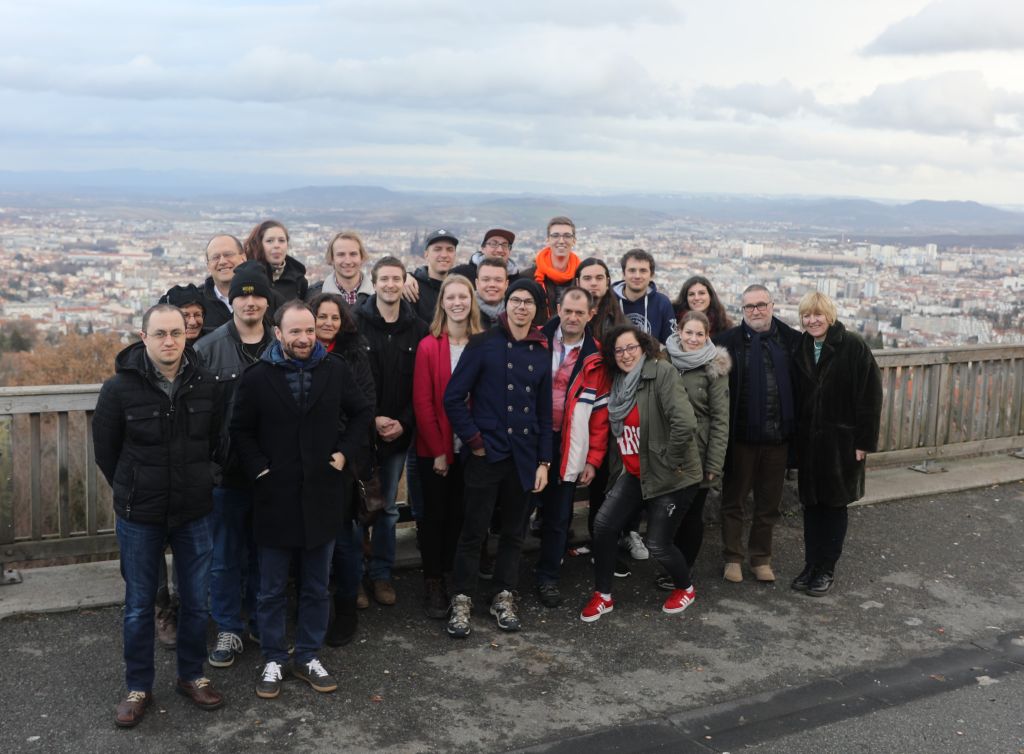 Since 1979, Studentenwerk Niederbayern/Oberpfalz has been enjoying a close and cordial partnership with Crous Clermont Auvergne. 2019 marked the year of the anniversary celebrations in Clermont-Ferrand.

Studentenwerk is dedicated to the promotion of intercultural exchange and has been organized exchange programs for students and staff in partnership with the Crous Clermont Auvergne, formerly C.R.O.U.S. Clermont-Ferrand, since 1979. Studentenwerk's two-year programs include visits to Germany and France, with the Germans visiting the French and vice versa. The aim is to provide an opportunity for intercultural encounters, for reducing prejudice attitudes, and for working on shared projects. The past 40 years have seen numerous friendships develop alongside the project results.

To mark the 40th anniversary of the partnership between Studentenwerk and Crous, a delegation of twenty embarked on a journey from Germany to Clermont-Ferrand from 3 until 8 February 2019. Both student representatives and Studentenwerk staff as well as Prof. Dr. Karl Stoffel, President of HaW Landshut University, and Prof. Dr.Thomas Fuhrmann, Vice President of OTH Regensburg University, took part in the exchange week in France.

An encounter against the backdrop of images: Clermont-Ferrand International Short Film Festival

Whereas the 30th anniversary celebrations in Regensburg in 2009 had been dedicated to "Music", the 2019 encounter was all about images. That's because the anniversary celebrations were an integral element of the Clermont-Ferrand International Short Film Festival (1 to 9 February 2019). The program included three screenings of German, French, and international short films. The participants got to sneak a peek of the multifaceted worldwide short film scene and were only too happy to become embroiled in the extraordinary atmosphere permeating the city during festival week and warming everyone's heart in the deep of winter. But there were more things to marvel at than the finished movie. The visit to "Atelier: Ecole éphémère de cinéma“ provided an insight into all the steps required to make a short film, and made it impressively clear just how much work is involved in the production of a film.

Another highlight, literally against the backdrop of images, was the private viewing staged for the Franco-German photo exhibition "Begegnung - Rencontre". The exhibition is the result of a joint exchange project: In May 2016, students from Landshut, Passau and Regensburg had met with French students in Clermont-Ferrand. In Franco-German tandems, they realized the concepts submitted in advance by the German students in the form of photographs. During the French return visit to Germany in June 2017, the tandems continued their photo projects in the Old Town of Regensburg, at Walhalla, at Donaustauf Castle and in the TF Media Studio of Studentenwerk. The photo exhibition is the amazing result of this amazing collaboration. An exhibition catalog specially designed by Studentenwerk provides information on the history of the photographs and the underlying intentions of the student artists. In 2019, Studentenwerk will also be showing the exhibition in Regensburg.

Living in the lap of French luxury? From a culinary perspective, this was certainly true! In addition to seven refectories plus nine cafeterias and kiosks each, Crous also operates two restaurants for special functions such as graduation parties. The Bavarian Night developed by Studentenwerk was stage in just such a restaurant on Cézeaux Campus. To the French hosts, the event offered a glimpse of Bavarian food, drink and hospitality. Three chefs from Regensburg, Landshut and Deggendorf, in collaboration with their French counterparts from Crous, prepared dishes like leg of venison with braised pears and spaetzle pasta, vegetable strudel, or Kaiserschmarrn parfait. The night proved a great occasion for seeing old friends again. After all, the guest list read like a who's who from previous exchange programs! There's no better company than friends to make a meal an occasion!

In volcano region: Clermont-Ferrand and the Puy de Dôme

It goes without saying that the exchange week moved beyond the movie theater or dining room: An important part of every encounter is getting to know the twin city, its surroundings, and its culture. Clermont-Ferrand, capital of the French Auvergne region, has more to offer than its cathedral built of black volcanic rock: its narrow alleys in the old town, the imposing Place de Jaude in the center of town, and especially the nearby Chaîne des Puys are inseparable charms of the city of Clermont-Ferrand. The highest peak of this volcanic chain, at 1,465 meters, is the 'local volcano' of Clermont-Ferrand: the Puy de Dôme. So a trip to the Puy de Dôme was not to be missed. Riding up on the cog train, the exchange participants got a glimpse of the volcano's snowy peak. While the whipping winds and fog on top of the summit did nothing for a panoramic view of the city and surrounding volcanic craters, it only enhanced the mystical atmosphere of the place. Fortified with some refreshments at high altitude, the adventurers were all the happier to embark on their descent down into the sunny valley!

There will also be new encounters between students and Studentenwerk and Crous staff in the coming year. More details on the planned program and the participation modalities will be published in due course on this website.
We are dedicated to promoting intercultural exchange and mutual understanding with our Franco-German encounters: To turn strangers into friends!
Long live intercultural exchange! Vive l'échange !
View the embedded image gallery online at:
https://www.stwno.de/en/international-en/partnership/partnerschaft-2019-en#sigProId241a7fba8e